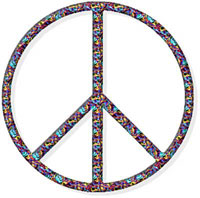 Thousands of innocent civilians were wantonly massacred in Afghanistan in retaliation for what they were not guilty of. Nobody is buying the "I did it for you" bullshit.

Saddam Hussein is a son-of-a-bitch who tortures and kills the Kurds and God knows who else. That, however, does not justify proposing to kill Iraqi children and women. And don't try to kid yourselves or anybody else with delusions of "selective bombing", which has proven to be a shameless lie. It is merely "selective" in that the bombs seem to selectively shower on dark-skinned people, and that liberally. Calling such atrocities "collateral damage" is a cowardly attempt at evading one's responsibilities.

Where the hell are you, old hippies? What happened to your "Love and Peace"? Or was it meant to apply exclusively to non-Islamic white American citizens?